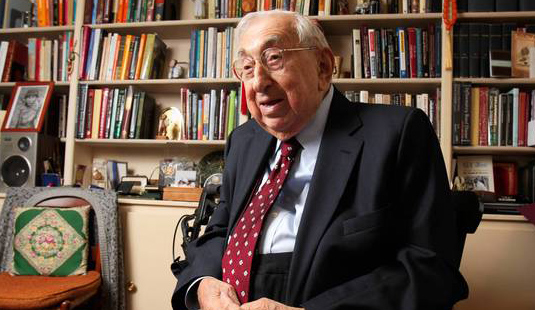 Renowned gastroenterologist Joseph B. Kirsner, the Louis Block Distinguished Service Professor of Medicine, died from kidney failure at his home in Chicago on July 7. He was 102.

Kirsner was a pioneer in the understanding and treatment of inflammatory bowel disease and a role model for physicians learning how to care for patients. He was a leader in understanding the immunology and genetics of inflammatory bowel disease and was one of the first to show the increased risk of colon cancer in patients with ulcerative colitis.

“Few if any physicians have had a broader and more positive impact than Joe Kirsner on thousands of patients, students and professional colleagues,” said Kenneth S. Polonsky, dean of the Division of the Biological Sciences and the Pritzker School of Medicine and Executive Vice President of Medical Affairs at UChicago. “His legacy at the University of Chicago will persist for generations. We are truly fortunate to have been able to call Joe a friend and colleague and a member of our faculty.”

Every gastroenterologist should feel “at least slightly indebted to Joe Kirsner,” said Stephen Hanauer, the Joseph B. Kirsner Professor of Medicine and section chief of gastroenterology at the University of Chicago Medicine.

After coming to UChicago in 1935, Kirsner helped transform the field of gastroenterology from an art — in his words, “speculative, impressionistic, anecdotal, almost mystical at times” — into a science.

Kirsner helped found the American Gastroenterological Association, the American Society for Gastrointestinal Endoscopy and the American Association for the Study of Liver Diseases. He also was a key player in the creation of the original General Medicine Study Section, a voluntary group of experts who advise the National Institutes of Health on the merits of grant applications.

Kirsner made fundamental contributions to the field, Hanauer said. “He was among the first to demonstrate that stomach acid was necessary for ulcer development, and he drew attention to the complex relationships between bacteria in the gut and the immune system in the development of inflammatory bowel disease.”

“He was also an extraordinary mentor, albeit a demanding one,” Hanauer said. “He was entirely devoted to the care of the patient, and he expected that same level of passion and commitment from the entire team.”

As a central figure in the evolution of what was once a small specialty, Kirsner has received every major award in his field but one — for which he is not eligible — the American Digestive Health Foundation’s Joseph B. Kirsner Award. The Crohn’s and Colitis Foundation gave him their lifetime achievement award twice, in 1991 and 2002.

“He was here for two lifetimes,” said Eugene Chang, the Martin Boyer Professor of Medicine. “He’s an icon in the field. Everyone knows him. He’s been a key player nationwide for so long that even those who have worked with him for decades only know pieces of his career. I’m not sure where the field would be without him. He was at the beginning of everything.”

Kirsner also taught generations of medical students and young physicians the importance of combining competence with compassion when treating patients.

“Although he was a devoted scientist, taking care of patients was always at the core of his thinking,” said David Rubin, associate professor of medicine and co-director of the Inflammatory Bowel Disease Center at UChicago. “He was a bulldog when it came to fighting for his patients, and he transmitted that tenacity to everyone on his team.”

That approach led to an unusual doctor-patient relationship. In 1976, at the recommendation of Donald Fredrickson, then the director of the National Institutes of Health, Kirsner was asked to take care of King Hassan II of Morocco, who had complex digestive issues. Over the next 22 years, Kirsner made 55 trips to Morocco, providing care to more than 200 patients, including the king and many members of the royal family.

Roots of his pioneering work

The oldest of five children, Joseph Barrett Kirsner was born in Boston on Sept. 21, 1909, to Ukrainian Jewish parents who had immigrated to the United States. He grew up in Boston’s East End neighborhood, a foothold for recent immigrants. Throughout his adolescence, Kirsner held multiple jobs, delivering newspapers, stocking a grocery store and working as a library clerk. He then worked his way through a six-year program at Tufts University that combined college and medical school.

He entered medical school in 1929, the week the stock market crashed. “My thought was to go through medical school as quickly as possible and start earning a living,” he recalled in a talk he presented at an IBD conference in 2004. He graduated near the top of his class in 1933 and, planning a career as a general practitioner, moved to Chicago for a two-year internship at Woodlawn Hospital on the South Side, with free room and board plus a salary of $25 a month.

One of his patients, however, had grander ideas. Minnie Schneider, a young dancer with an ear infection, was hospitalized at Woodlawn. “She was a ballerina,” Kirsner recalled. “I fell totally in love with her.”

She pushed him to choose a specialty soon after they were married in 1934.

So he began attending lectures at UChicago. Walter Palmer, who had established the first academic gastroenterology unit in the United States in 1927, particularly impressed Kirsner. In August 1935, an entry-level faculty job opened up and Kirsner joined the hospital staff as an assistant in medicine with an annual salary of $1,000.

He began working with Palmer, who was doing pioneering studies in stomach and intestinal disorders. He also began a PhD program in biology, which he completed in 1942. His wife gave up dancing for secretarial work to help with expenses.

Kirsner’s early research involved peptic ulcers, stomach-acid secretion and body chemistry, which led to an unusual research collaboration. A penniless, homeless young man, known as Edwin R., enrolled in one of Kirsner’s research studies. Edwin badly needed treatment. He also needed a job and a place to live, so Kirsner kept him hospitalized for an entire year as a patient and research subject and trained him to be a technician.

“It would be difficult to gain approval for such an arrangement today,” Kirsner acknowledged, even though none of the studies put Edwin at risk, “but it was acceptable to him, and he helped me start some of my research. Everybody was happy.”

In the late 1930s, Kirsner began shifting his focus to inflammatory bowel diseases (IBD): ulcerative colitis and Crohn’s disease. Working initially with Palmer, Kirsner developed new methods to manage IBD patients. In the 1940s, he showed that patients with IBD, even mild cases, lost high levels of protein, a discovery that placed new emphasis on nutrition. He developed the first animal models of IBD, demonstrated the influence of the immune system and genetics on this disease, and documented the increased risk of colon cancer in patients with IBD.

World War II forced Kirsner to put his research on hold. In 1943, he joined the U.S. Army as a physician. In August 1944, about 10 weeks after D-Day, his unit landed at Utah Beach, Normandy. They established bases at various hospitals in France and Belgium, one of which was hit by a German V-2 rocket. Over the next six months, Kirsner cared for U.S. soldiers with severe battle wounds, captured German officers and survivors of the Nazi concentration camps who had complex nutritional issues.

Soon after VE Day, he was transferred to the Pacific Theater, where he advised on the rehabilitation of more prisoners of war, including a group of badly burned Dutch prisoners who were being held captive in Nagasaki in August 1945 when an atomic bomb obliterated much of the city. He was discharged in 1946 at the rank of major, with three battle stars.

Devotion to his patients

Back at UChicago, Kirsner continued his research in IBD and rose steadily through the academic ranks. He became an associate professor in 1947, professor in 1951, chief of gastroenterology in 1960 and the Louis Block Distinguished Service Professor of Medicine in 1968. In 1971, he was named the chief of staff and deputy dean for medical affairs.

He published more than 750 scientific papers and 18 books, including six editions of his authoritative textbook, Inflammatory Bowel Disease. The 2004 edition of this text is 842 pages and weighs 4.4 pounds. He trained more than 200 of the field’s leading specialists. He continued to see patients until age 95; even then, former patients continued to call him for advice.

Kirsner also helped raise funds for gastrointestinal studies. In 1962, a collection of his grateful patients formed the Gastro-Intestinal Research Foundation, which has provided nearly $30 million to support gastrointestinal research at the University, including $2 million for the University’s 17,000-square-foot Joseph B. Kirsner Center for the Study of Digestive Diseases, which opened in 1986.

“In my opinion, and the opinion of most people involved with GIRF, without Dr. Joe, this group would ever have been possible,” said Sy Taxman, a longtime member of the GIRF board. “He leaves us all with a strong traction and big shoes to fill.”

Kirsner did all this while focusing most of his attention on taking care of patients, one at a time. “Dr. Kirsner taught me to be a doctor’s doctor,” Hanauer said. “Never was a patient too difficult nor would he ever lose patience in caring for an individual.”

Kirsner had little tolerance for doctors who did not share this devotion. “After nearly 70 years in the practice of medicine,” Kirsner wrote in a 2002 essay for the Journal of the American Medical Association, “I cannot condone the diminished sensitivity of physicians to patients.”

His wife of 64 years, Minnie, died from complications associated with Parkinson’s disease and stroke in 1998.

Kirsner is survived by his son Robert Kirsner, professor of linguistics at the University of California at Los Angeles, and his wife Elaine; their son Daniel, and daughter Rachel Kirsner Schneider and her husband Steve; and four great-grandchildren: Yaron, Gilad, Amira and Eden Schneider.

A memorial service is being planned for later this summer. In lieu of flowers, contributions should be directed to the Gastro-Intestinal Research Foundation, 70 E. Lake St., Suite 1015, Chicago, IL 60601.