High-throughput drug screening conducted using various technologies, such as robotic handling and micro-titer plates, have significantly advanced drug development. However, the costs and time associated with such technologies are exorbitant. Droplet microfluidics provides a popular lab-on-a-chip technique where reagents may be combined in pico-liter volumes in a fast and controlled manner. We use such devices to generate water-in-oil emulsion droplets at high throughput (~5k-10k drops per second) that efficiently encapsulate cells in presence of drugs. Reducing the size of the reaction compartments to pico-liter volumes allow us to be parsimonious with reagents while the large number of droplets (~105-106) provides superior statistical resolution. 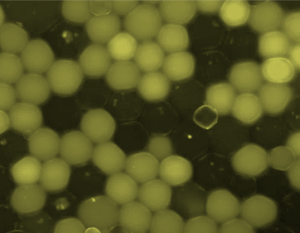 After the drops are generated, we collect the drops off chip, incubate them for different time intervals, and then re-inject the drops into a second microfluidic chip where they are excited by a laser beam and the resulting fluorescent emission from the drug and cells (dead/alive) are simultaneously detected using photo-multiplier tubes (PMT). The PMT voltage, indicative of fluorescent intensity, reports drug concentration, while the duration of the signal distinguishes a drug-laden drop from a live cell (bottom, left). Overall statistical information is aggregated onto a heat-map shown on bottom, right.